Home > UPCOMING EVENTS (Save the Date) > Join us for our October 22 event: Online Watch Party of “Arna’s Children” and Meeting the Jenin Freedom Theatre 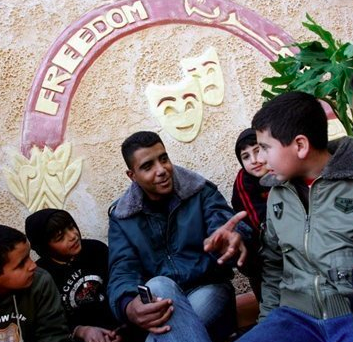 Join us for our October 22 event: Online Watch Party of “Arna’s Children” and Meeting the Jenin Freedom Theatre

Join the Palestine Foundation on Friday, October 22 at 7 pm Pacific (10 pm Eastern) for an online screening of “Arna’s Children,” the moving 2003 documentary by Juliano Mer-Khamis.

The recent self-liberation of six Palestinian prisoners, including Zakaria Zubeidi, co-founder of the Freedom Theatre, and their subsequent re-arrest and torture, has drawn attention to this ongoing project in the heart of the Jenin refugee camp. Zakaria is one of the Palestinian participants in the theatre featured in the 2003 film.

We will also be joined by representatives of the Friends of the Jenin Freedom Theatre, which works directly to support the children and youth of Jenin refugee camp in their creative endeavors as part of the theater.

This past year, there has been strong Palestinian resistance against Israeli aggression: fighting evictions in Sheikh Jarrah, defending the Al-Aqsa Mosque, the huge public outcry at the Israeli bombings of Gaza, and countering the most recent outrage–labeling several Palestinian human rights organizations as “terrorists.”

Raising popular voices and engaging civil society have proved far more effective than relying on a worn-out political establishment. The Israeli government has responded with increased military force. In Jenin, constant raids into the refugee camp and arrests and killings by the Israeli military intensified after the escape of six political prisoners (including Freedom Theatre co-founder Zakaria Zubeidi) from high-security Gilboa prison. His capture shone a spotlight on The Freedom Theatre’s message of resistance through art.

“WE ARE THE FREEDOM THEATRE … WE ARE GOING TO SAY OUR OPINION
AND WHAT WE BELIEVE IN
…WE ARE NOT AFRAID OF PUNISHMENT.”

Covid-19, as elsewhere, closed The Freedom Theatre to live audiences. In response, the Drama School, which continued to hold classes and workshops (with extreme caution, given that Israel withheld and delayed vaccines to the Occupied Territories), performed to delighted audiences in the streets of Palestine instead.

Yet their work is increasingly an uphill battle, not only because of the Israeli occupation, but because of the constant threat of losing their funding. The Freedom Theatre and other Palestinian arts organizations and NGOs have been fighting European Union funding rules dictating which Palestinians can be involved in their work. (European organizations, both governmental and foundations, are the most important funders of Palestinian NGOs, including The Freedom Theatre.) As a member of the Palestinian Performing Arts Network (PPAN), a prominent cultural coalition, The Freedom Theatre has rightly refused to accept the EU’s restrictive terms in the name of artistic freedom, even if it means losing a vital source of funding.

The Freedom Theatre is a transformative force in Jenin. For the most recent class of acting students, the chance to express themselves–to act, scream, be honest and raw, face trauma— gave them life, hope and a reason to push on. Its impact on their lives is invaluable.

The Freedom Theatre is a transformative force that reverberates across Palestine. Recently, Artistic Director Ahmad Tobasi described to us the awe of Palestinian artists and colleagues from Nazareth at The Freedom Theatre’s ability to offer challenging topics considered taboo in their more open, liberal communities.

The Freedom Theatre produces professional productions and resists the occupation through art, creativity and ingenuity in the face of almost unbearable struggle — but perhaps most important is its human impact.

Please help, support, be part of, The Freedom Theatre, to continue fighting through art.

Donate to the Freedom Theatre through Palestine Foundation.