Home > Past Events > Ya Sitti 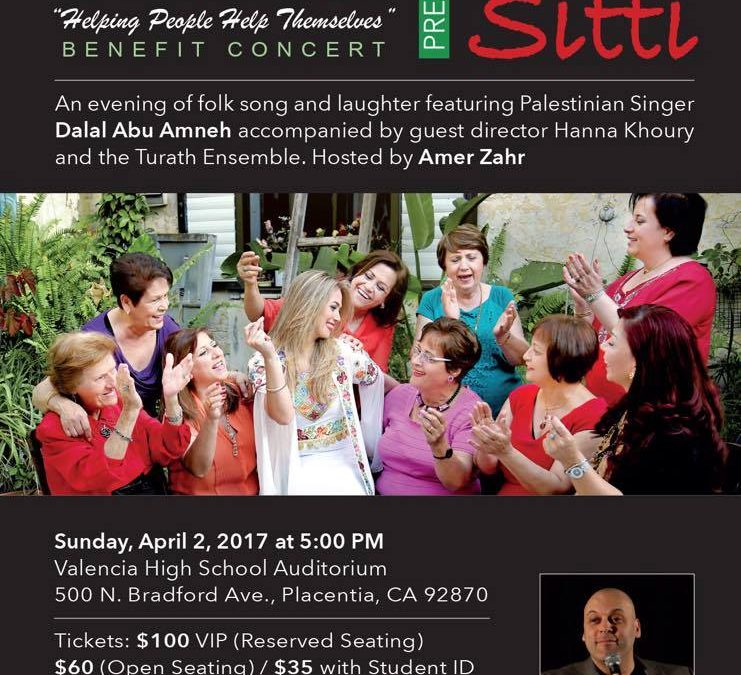 by admin
News, Past Events

Dalal Abu Amneh is a renowned Palestinian singer originally from Nazareth. She has gained fame and appraisal for her ability to perform a wide variety of different musical styles, ranging from Arabic Classical Tarab, Traditional Arabic folklore, and Palestinian national songs to Andalusian Muashahat and Sufi Music. Respected musicians in the Arab world have praised her for the skills and beauty of her voice. She draws from the rich and old heritage of the Arab culture, furthering her objective to develop and spread it to the wider world. Furthermore, Dalal has been crafting a global Palestinian identity and advocating for the Palestinian cause through her touching music, which is imbued with the Palestinian traditions of folk, national pride, and freedom.
As an international singer, Dalal has been touring in many different countries around the world for over 10 years, presenting her special musical repertoire, which includes, beside her own songs, Tarab and Folk Arabic songs.

She has released several songs and four albums, “Kareem Ya Ramadan” , “An Balady” , “Ya Sitti” and “Nur”. Besides singing, Dalal also writes some of her songs, such as in “Nami” and “Isharet Haq”. Her musical repertoire is influenced by different musical styles combining Tarab old music and Folk music with different musical genres, including Jazz and Electric music.

Recently, Dalal released her first clip “Beredak,” where she offered a modern vision of the classical song of Um Kulthoum. Dalal is currently performing her traditional show called “Ya Sitti” (O grandma) in different cities in Palestine and throughout the world. In Ya Sitti, Dalal presents a genuine lyrical performance, which reflects the Palestinian heritage from the Galilee,telling handed down stories from local grandmothers, accompanied by a group of old women, whom she calls the Palestinian heritage guards. Moreover, Dalal released Ya Sitti as a musical album and video holding the same name. Both have made a big success since their release.

Recently, Dalal recorded another album called “Nur” (light), in collaboration with Al- Bustan Foundation in Philadelphia, USA. Nur is a musical journey into Sufism that speaks of eternal and divine love and longing, presenting poems for the most known Sufi poets like Rumi, Rabe’a, Ibn Arabi, Hallaj and Ibn Fared. It will be released in May, 2017.

Beside her musical career, Dalal is also an active neuroscientist and finishing a doctorate in Neuroscience in the Faculty of Medicine at Technion. Dalal is married to Dr. Anan Al- Abbasi, a physician and a poet, and they have two children.

Ibrahim AlNashashibi was born as an artist, maybe several times. Some he barely remembers yet he never has been able to see the big picture, so he thought (as a lot of people do) that his birth in Jerusalem on August 27, 1950 was his first coming to life.

Even though at a young age he recognized the call of art, the influence of his family and peer pressure made him follow the directions designed for him. At the beginning he was a rebellious boy, hating school because they taught childish things not related to his imagination.

Because of his nature, he became a successful person, and later did well. To please his mother Samira Al Dajani he went to Novi Sad in the former Yugoslavia to medical school. One year later he discovered that he couldn’t deal with the blood or pain.

So he thought that maybe his father Shafiq was right- he became a lawyer and unhappily practiced law for 15 years while trying to find himself. Fast-forward to age 38 in San Diego when his awakening arrived. Ibrahim had his first art exhibit and became the happy man who met and was united with the child within. Hundreds of works of art were created and shown nationally and internationally, encouraged by a great love given to his soul by Hafida, the lady he admired. Sadly, in April 2009 Hafida passed away but not before she uncovered the writer within his injured soul.

Sam Hassan is an accomplished visual artist from Syria with a style that relies on traditional techniques rarely practiced in the West. His work features beautiful geometric themes and Arabic calligraphy similar to those found in ancient Arab architecture.

Sam has especially excelled in the practice of Ajami art that utilizes wood putty for three-dimensional art pieces found in old Damascus. The putty is typically made using a secret recipe passed from artisans to apprentices.

In addition to this style, he has left his mark on portrait drawings. Sam Hassan is an active member of the Turath Project, a community effort that promotes traditional arts from our heritage.